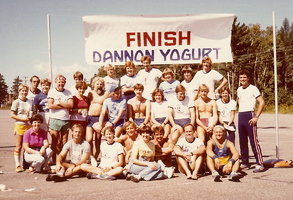 Deeply immersed in the close-knit culture of long-distance running, Pam and Bob Bulik were avid competitors. To all appearances, they were also a happily married couple, devoted to each other and their two young children. Then, Bob made a fateful decision. He began an extramarital affair that led to his wife's tragic death and to one of the most sensationalized and heavily attended trials in Green Bay's history.

Candidly written by Pam's best friend, Run At Destruction exposes the irresistible human passions that make us so vulnerable and the ultimate price we pay for choosing to act on them. You'll relive every detail of the crime and the exhaustive police investigation, and watch the courtroom drama from a front-row seat as a major homicIde case unfolds in a small town where everyone knows all the players. Then, when you've heard all the evidence, you can decide for yourself - was Pam Bulik's death a terrible accident, intentional suicide, or premeditated murder?

Where to purchase Run At Destruction:

Click here to order my book RUN AT DESTRUCTION

This true story takes place during the first running boom in the 70's and 80's. I wrote Run At Destruction to document my memories surrounding my best friend Pamela Bulik’s life and to resolve, for myself, why she actually died. In turn I wanted to pass along this knowledge to others that might be headed along Pam's same path. When I lived through these events, even though I was feeling substantial loss and pain, I was enthralled like the rest of the community. To me, the most unbelievable thing was that the Buliks were integral members of our Fun Run group. It was hard to believe that one of our members could be arrested for planning the murder of another.

What people are saying about Run at Destruction:

Publishers Weekly:
Runner and longtime Green Bay, Wis. resident Drews revisits the mid-1980s death of her close friend and fellow runner, popular high school teacher Pam Bulik. She chronicles the small community's response to Pam's death, suspicions of suicide that rang false, and the subsequent naming of Pam's husband, Bob Bulik, as the primary suspect. Events, including Bob's alleged affair, drag readers through the gruesome and tawdry details, some difficult to read (especially in descriptions of the victim). Like Melanie Thernstrom's The Dead Girl, about the life and tragic death of her best friend, this title also relies on the strong bond between author and victim for emotional weight; passages about their shared moments, and Drews's feelings of emptiness in the decades since, are remarkable. Copyright © Reed Business Information, a division of Reed Elsevier Inc. All rights reserved.

"Run at Destruction is a tragic--yet fascinating--true story of an unfathomable death in the Heartland of America. It happened in a wholesome community of runners and educators, perhaps the last group you would expect to be involved, however tangentially, in secret affairs, deception, and infidelity. Except for the bond between mothers and their children, there may be nothing stronger than women friends who are there to pick up the pieces when the world explodes, and to listen with true concern. Author Lynda Drews writes of her lost friend, and of her own efforts to find justice for Pam Bulik. Readers will find themselves walking along with Drews as she describes an enviable friendship, her grief when it ended suddenly, and the layers she peeled away to find the truth. Wonderfully written. A must for true-crime readers."

"Run at Destruction is a riveting and compelling read! Drews takes us on a jog back to the 1980's running boom, layering intriguing portrayals of a running community's friendship within a baffling murder mystery. This is the 2009 runner's read."

"Run at Destruction captures the family-like culture of a running group, showing how its members support one another especially in times of crisis."

"A witness for the prosecution who was best friends with the victim, offers
an eloquent and intimate history of a sordid murder, one set amid a weirdly
compelling club of 80s era joggers."

"Run At Destruction is written with the beat of a runner's heart: steady intensity racing toward an inevitable finish. Drews is the John Grisham of the running world, pulling readers into a unique subculture where the drama unfolds." 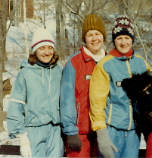 History of RUN AT DESTRUCTION:

In 1974 my husband, Jim, accepted a teaching and coaching job at Green Bay East High School, and I was hired as a systems engineer at IBM. My job was male dominated, so it was difficult for me to establish any close female friends– and find a running buddy. But in the spring of 1975 that changed. At an East High track meet, the former coach’s wife told me she knew a woman about my age who was also a runner. That's how I met Barb Delong and her friend Pamela Bulik.

Then in 1976, Jim and I attended the Montreal Olympics with Beezie and Bruce MacNeil. He was a fellow teacher of Jim’s from East High School. That was where the idea to establish a Green Bay community Fun Run was hatched. Fashioned from a Runner’s World magazine program, Bruce’s goal was to bring local people together with this common interest.

Because the MacNeils had children, the runs became a family event. Of course, the Buliks and Delongs were included in the mix. Every Wednesday night, from April to September, Bruce organized the runs in a park located about a mile from Lambeau Field. Over the years, the group also began gathering at rotating homes throughout the winter months.

These weekly runs still unite our group of around fifty friends. There are no officers or structured meetings. To participate you just show up. No one is judged by financial status, education, sexual orientation, political views, race, or religion. If some calamity befalls a member, only one call is needed and the group responds. Each asks how the other is doing, and honestly cares.

1) Have you written other books?
This is my first book. I took creative writing in college, a writing children's literature course through the mail, and three writer's workshops, but had never attempted a book until Run At Destruction. I was the first woman computer science graduate from UW-La Crosse and was hired by IBM where I used more of my left-brain. Then, in the last five years of my thirty-year career, I moved into marketing. This combination helped me research and write my book about our close-knit running group and the terrible tragedies that occurred during 1984.

2) When did you start writing this book?
I started writing this book in 2004, right after I retired from IBM. Initially, my friend Beezie MacNeil and I wrote the book together as a novel. Her husband, Bruce MacNeil, launched our local Fun Run Group in 1977. After Beezie and I got advice from a publishing attorney, however, we realized, if the characters were recognizable this had to become a true account. So in 2006, Beezie bowed out and I rewrote the entire book as non-fiction. I changed the story from third person to a combination of first, where I tell the story from my perspective, and third when I focus on the investigation and trial. This rewrite took extensive research. In addition to referencing old running logs from the seventies and eighties, photo albums, and interviewing friends and family members, I purchased police records, scanned courtroom documents, and interviewed the principles from the case (detectives, attorneys, judge, coroner, doctors, and even four of the jurors.)

3) What made you think this would be a good story?
Maybe everyone thinks their group of running friends is unique, but I have never seen a book focus on this special bond and the way they support each other through good and terrible times. Also, the circumstances of Pam’s death and the year leading up to it were very bizarre. In addition, the fact that both Buliks were runners provides new twists to the courtroom testimony and the trial outcome. Four people from our running group, including myself, testified at the trial.
When the presiding judge, Richard Greenwood, was interviewed for the book, he said the Bulik case still puzzles him. He still muses on it. Readers will need to decide for themselves if Pam’s death was a terrible accident, intentional suicide, negligent homicide, or a premeditated murder.

4) How well did you know the people involved?
After I was introduced to Pam we started to run together. Since we lived only about a mile apart, we often left our homes at the same time and met in the middle. Then, jogging at a comfortable pace, we delved into every imaginable topic. There is nothing like a run, with miles of roads stretching out in front, to give you uninterrupted time to really talk. Pam and I certainly weren’t sisters, but the way I’d felt about her was as dear as that bond.
Both Jim and I liked Pam’s husband Bob, but he wasn’t in our tight circle of free-spirited running buddies. Bob was also a Marine Reservist and in addition to running, focused on triathlons. To many in the Fun Run group, Bob seemed a bit aloof and withdrawn. At my high school reunions, former classmates had claimed that was how they’d perceived me. I’d never felt I was, it was just shyness that made me seem that way. Back in 1984, I believed that about Bob, too.
The “other woman” in the book was also a Green Bay teacher and started coming to our Fun Runs the summer before Pam’s death. She actually ran with Pam and me one night even though she was having a secret affair with Pam’s husband.

5) What was your relationship with them?
In addition to the local runs, our family always rode with the Buliks to weekend runs like the Marquette Marathon, the Munising Run, the Chicago Marathon, and Milwaukee Marathon. We went on ski weekends together, had dinner parties at each other’s homes, and the Buliks hosted our group’s New Year’s Eve Party.
In 1982, the Bulik family spent a weekend up at my family’s cottage in Eagle River where Bob finally opened up and shared his personal background. That weekend I reached the point where my feelings for him ran more than skin deep.
The guys from the group would go on their annual “Indy” trip and Bob would accompany them while the girls would go to our annual Bonnie Bell races in Milwaukee, Minneapolis or Chicago. Pam would always drive her nine-passenger van for the group. Like the rest of the women, Pam loved the Bonne Bells. They celebrated the gains women had made in the sport of running. Back in 1984, of the 25 million US runners, nearly half were women. The Green Bay gals had been early adopters, breaking the social constraints decreeing that exercise was unseemly for us, but appropriate for our husbands. For Pam, it had been exciting to be at the cusp of the changes for women in the physical world.  - Writing this book made me realize how much I still miss her. 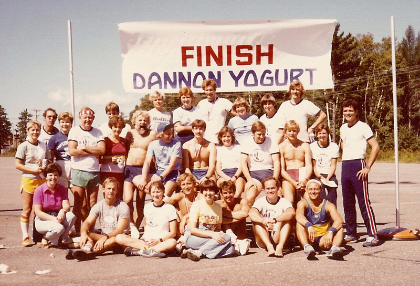 1981 Munising Michigan Run. Jim and I road up to the run in the Buliks' van. Jim is in the red hat with Pam to his left. Bob is seated in the row behind with sun glasses on. I am sitting in the center in the blue banded T-shirt. Many in the picture are characters in the book. 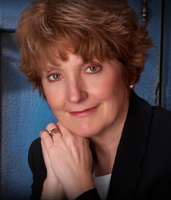